Is there anything more perfect than a Sunday Morning? This past Sunday, Akio and I woke at the crack of dawn as we prepared for the Sunday Funday adventure that awaited us. For several weeks I had yearned to go whelking, a pastime I thoroughly enjoyed in my childhood. Whelks are edible sea snails generally found  along the edges of the sea rocks. Readily Akio agreed to this outing, however our plans were temporarily suspended while we waited for the rough seas to subside. Finally, the day was here and I was super excited!

Whelking Tip #1 – The best time for whelking is early morning just as the sun is rising. It is nice and cool at this time and you can even catch a sunrise! The sun can be quite harsh later in the morning, so it is advisable to wear a hat. Long clothing is also best to protect you from the sun and the jaggedness of the sea rocks. You will also need a bucket and something with a pointy edge to pry stubborn whelks from the sea rocks.

Around 6:30am we headed to the beach and on our drive down we were greeted by a beautiful sunrise. We stopped for a quick pic and we continued along our way. As we pulled up to Mimi Bay, the first thing I spotted was a pair of old, sole less  abandoned sneakers. They would definitely not be the last shoes we encountered during our hike along the sea rocks. Losing shoes is practically a whelking rite of passage!

Whelking Tip #2- Wear old shoes. Sea rocks can be very pointy and you will probably find it necessary to wade in the water at some point. Both can cause havoc on the soles of your shoes so be sure not to wear your favourite sneakers!

To start off we headed east on Mimi Bay. As we trekked along the coast we happened upon a small beach neither of us had ever visited before. I was really happy about this as I am on a personal journey to visit all of Anguilla’s 33 beaches (#MAEDiscoverAnguilla). If you haven’t already, check out MAE’s #DiscoverAnguilla Challenge.

Walking along the coast, the good news was there were tons of whelks. The bad news, the only thing left were the shells. We found a large quantity of empty well preserved whelk shells along the sea rocks and in the water. This indicated that the area was quite good for whelking. Akio concluded that this was not the work of humans but rather,more than likely, an octopus in the area. Again, good news for the octopus, bad news for us. We managed to collect a few whelks, however our bucket was still looking pretty sad at this point.

All Smiles while whelking at Mimi Bay

We decided to call it quits in that area and to try our luck on the west end of Mimi Bay. The rocks in this area were a lot higher and the sea was a bit rougher.  Given the height of the rocks, we had to climb down at several points to reach the whelks. This made it impossible to stay dry as waves continued to crash along the rock edge. Akio and I developed a system where one of us picked the whelks while the other watched out for large waves. There were one or two occasions where we were caught off guard which resulted in both of us being soaking wet by the end of our trip.

Whelking Tip # 3 – Whelking is fun but it also requires a high level of cautiousness. The rocks themselves are very pointy and the tips can sometimes shatter when you walk on them. Be super careful hiking along the rocks. Avoid whelking during high seas or rough sea weather/seasons as this is quite dangerous. Avoid climbing down sea rocks if you are not a strong swimmer or accompanied by a strong swimmer. Safety should always be your first priority.

Living on the Edge

We left Mimi Bay around 9 am, spending approximately two hours whelking. For our time and our efforts, the fruits of our labour were quite satisfactory. We managed to get about a quarter bucket of whelks, more than enough for the two of us. It was definitely a great Sunday morning full of fun, exercise and adventure!

To prepare our whelks, we boiled them and then picked the meat from the shells. Our dish of choice was whelk stew prepared by Akio. The stew included whelks, dumplings, potatoes and an assortment of veggies. It was absolutely delicious!

Whelking Tip #4 – Fish hooks, hair pins bent into hooks or similar items are great for picking the whelks from the shells. Depending on how much whelks you have the process can be long, tedious and a bit messy. I like to watch a show or YouTube videos during this time. Makes the process go by much quicker!

I am already looking forward to our next whelking adventure.

See other adventures on the beach below:

A day at the Aqua Park

A day on Scrub Island

A day at Little Bay 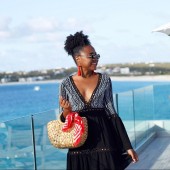 Style Enthusiast. Closet Adventure-Seeker. Youth Advocate. Mojito Lover. My daily mantra is “Life is not meant to be lived on the sidelines.” I love the excitement and wonder of travel, discovering new places and faces. When I’m not consumed by wanderlust, I really enjoy feeding my mind and stomach! Dining is perhaps one of my most favourite pastimes and I consider myself a bit of a foodie.

What are your plans for Anguilla Day?

Three Things I would magically transfer from Cambridge to Anguilla

Share your thoughts with My Anguilla Experience. I would love to hear from you! Cancel reply

This site uses Akismet to reduce spam. Learn how your comment data is processed.